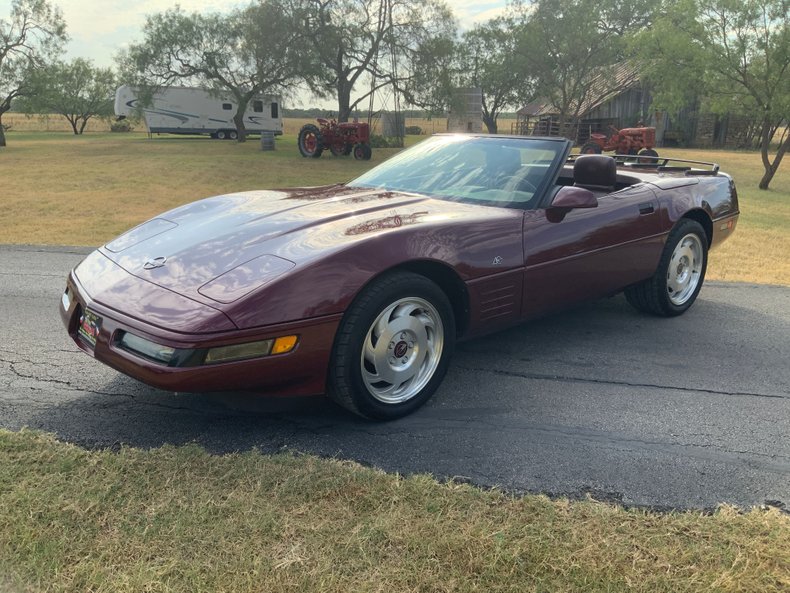 Welcome to StreetDreamsTexas as we celebrate our 21st year in the classic and muscle car business. Fourth generation Corvettes (C4, 1984-1996) are currently some of the best bargains for performance enthusiasts on a budget. Certain cars, however, seem destined to be part of a fine collection. Such is the case with this Ruby Red Metallic 1993 Corvette Convertible with the 40th Anniversary Package. This pampered jewel has a mere 1039 miles on the odometer, and it was noted by a prior owner that the car has traveled farther in an enclosed trailer than it has been driven! Our pristine 'trailer queen' is absolutely loaded with factory features and options including the 40th Anniversary Package, 5.7L LT1 V8, power rack and pinion steering, power 4-wheel disc brakes with ABS, power windows, power door locks, power seats, electric remote heated O/S mirrors, 6-speed manual transmission, electronic air conditioning, tilt steering, cruise control, leather wrapped sport wheel, Ruby Red leather interior, selective ride and handling, Delco-Bose AM/FM/CD/Cassette stereo, black luggage carrier (one of 765), and removable hardtop (one of 976). The prior owner has stated that the only non-original items on the car are a new battery, oil, and new tires! Also, out of a total of 21,590 1993 Corvettes produced, only 2043 were convertibles with the 40th Anniversary Package. This gem understandably runs and drives like new, but it honestly deserves to be preserved in a collection. Street Dreams (830-997-1950) is a full service dealership that can assist with worldwide delivery, insurance, and financing options.