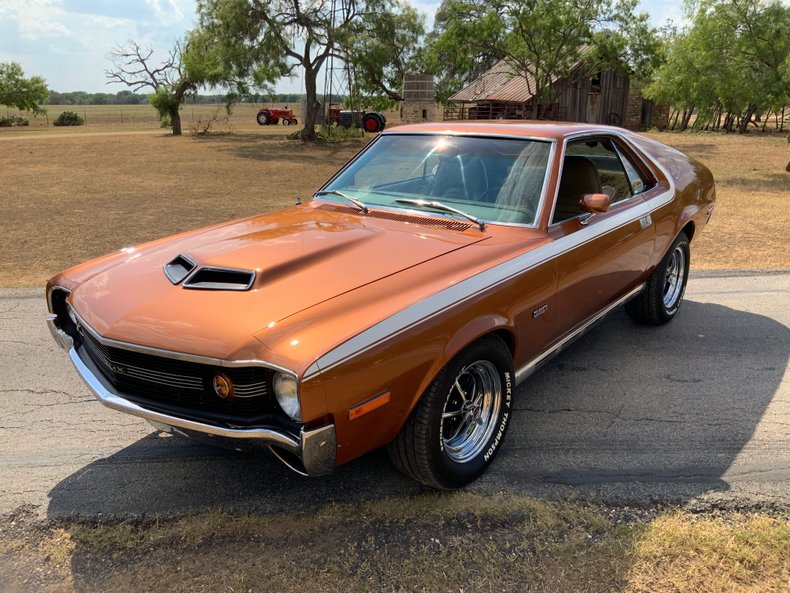 Welcome to Street Dreams as we celebrate our 23rd year in the classic and muscle car business. The success of Ford's Mustang after its introduction in the spring of 1964 caught the other American automobile manufacturers completely by surprise. Some even whispered that it would fail as badly as the Edsel had! Well, after Ford sold 22,000 'Stangs on THE FIRST DAY (!), the other companies had to scramble in order to tap this market segment. AMC, which had been known for economical but boring transportation, jumped in with both feet. By the time that their pony car entry, the Javelin, was ready for its 1968 release, they doubled down with the shortened, two-seat AMX. This sweet Bittersweet Orange Metallic (79A) 1970 AMX is a fine example and one of only 4116 made in the two-seat AMX's final year. Beneath the functional ram air hood is the 390 V8, the most potent engine that was available in 1970. Although AMC did not stamp their blocks with a VIN derivative, we're confident that this is the original engine due to the engine tag (212X10) showing a 390 engine that was finished on 12/10/1969. Additional features include power steering, power front disc brakes, air conditioning, automatic transmission, console, correct brown leather interior (036L), Rim-Blow steering wheel, factory AM radio with 8-Track (!), and cool Mickey Thompson tires (235/60R15 F, 245/60R15 R) on beautiful Magnum 500 wheels. The AMX specific number on the glovebox is 18584. This rare gem is nice from top to bottom, front to back, and it simply stands out in a crowd. Another unusual classic from the team that can make your dream a reality. Street Dreams (830-997-1950) is a full service dealership that can assist with worldwide delivery, insurance, and financing options.