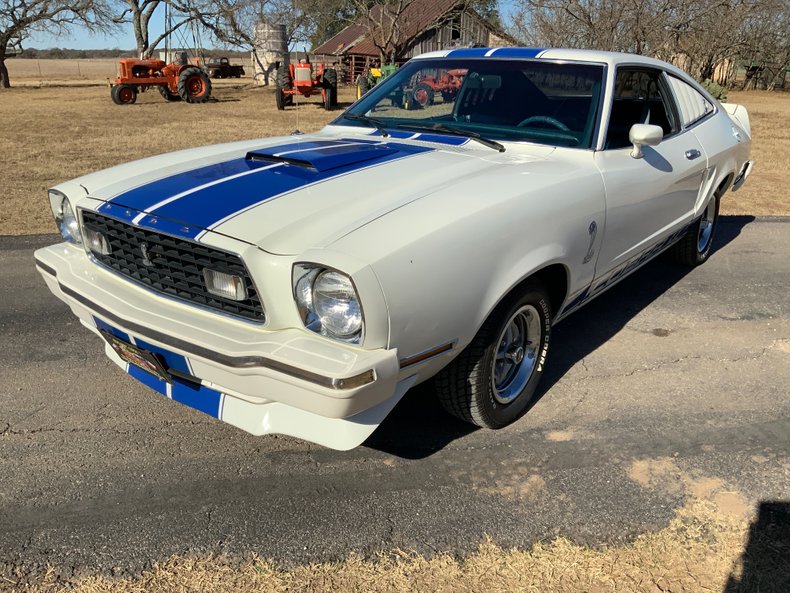 Welcome to StreetDreamsTexas as we celebrate our 22nd year in the classic and muscle car business. Ford's Mustang has become an integral part of American car culture during its 56 year tenure as America's first, and only continuously produced, pony car. And while every generation of Mustang has its advocates and supporters, the often overlooked 2nd generation Mustang II (1974-1978) is finally receiving some of the attention (and appreciation) that it deserves. Compared to its immediate predecessor, the Mustang II was 20" shorter, 4" narrower, and up to 500 lbs. lighter, assuring strong sales as it was released just in time for the 1973-1974 'energy crisis'. Our vivid 1976 Mustang Cobra II is a cool example of the car that Farrah Fawcett made famous during the original Charlie's Angels television series. A Deluxe Marti Report confirms that this little gem was ordered with Polar White paint (9D), Blue Vinyl Luxury Bucket Seats (HB), 2.8L V6 (Z), 4-speed manual transmission (6), Traction-Lok rear axle with 3.40 gears (P), power steering, power front disc brakes, console, Luxury Interior Group, AM radio, and the Cobra II Package. The original radio has been upgraded to an aftermarket AM/FM/Cassette. With its power rack and pinion steering, 4-speed, optional axle ratio, and light weight, this little charmer is fun to drive and it attracts more attention than many cars that cost substantially more. Hell, Lee "I saved Ford AND Chrysler" Iacocca called the Mustang II "the little jewel"! Blow dryer and teeth whitening strips not included! Street Dreams (830-997-1950) is a full service dealership that can assist with worldwide delivery, insurance, and financing options.