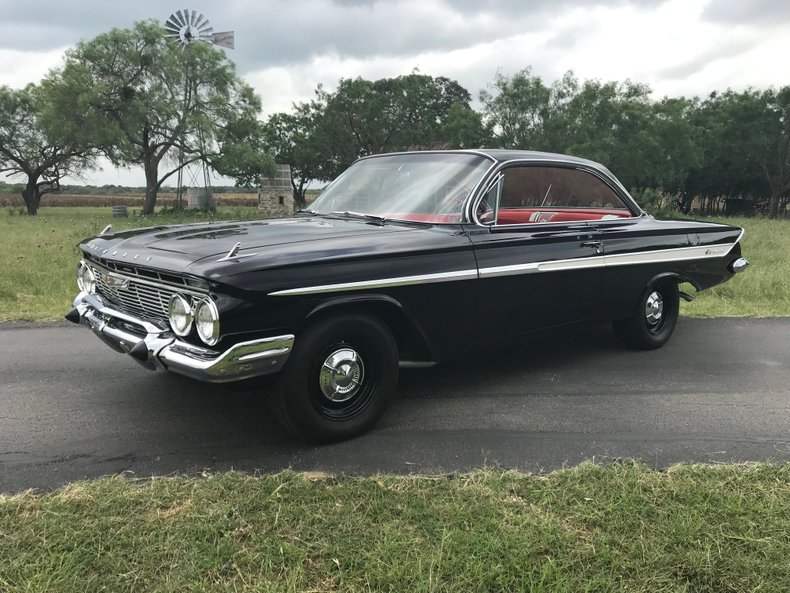 Bubbletop, Big Block, 4-Speed, Clean, Straight, and Stunning been in a magazine

Welcome to StreetDreamsTexas as we celebrate our 20th year in the classic and muscle car business. The Chevrolet Impala has been produced in many shapes and sizes and a variety of performance levels during the course of seven decades and ten generations. Not a single one, however, looks better than a well done 1961 'bubbletop'. The delicate greenhouse on these cars is accentuated by the slim 'C' pillars and large rear window, a design that remains beautiful and contemporary to this day. This stunning 1961 Impala Sport Coupe illustrates these design cues perfectly. The laser straight body looks slightly sinister in its correct Tuxedo Black (900A) paint, which contrasts nicely with the correct red and white (873) interior. Beneath the expansive hood rests a powerful yet smooth Chevy big block (2600 miles since restoration) that's been fortified with a Holley carburetor, an Edelbrock Torker II aluminum intake manifold, very nice headers, and HEI. Notice how the later engine is dressed to resemble a 409 (displacement is very close- 402+ .030 overbore= about 408 ci). Classy. Additional features include power steering, power front disc brakes, Vintage Air A/C(installed since video), a smooth-shifting Muncie 4-speed manual transmission, tubular A-arms, and auxiliary gauges. This is a California built car (L) with one piece front and rear bumpers, no rust, and all-original pans. The grille, headlight bezels, rear bumper guards, and three of the four front/rear valences are all NOS. An included copy of the February 2016 issue of 'Chevy Classics' magazine notes that the car has won several Super Chevy shows and Super Nationals in Albuquerque, NM and scored 986 points, Platinum Award, Modified Restored, at the 38th International Convention in Norman, OK. This car is straight, clean, and impressive from front to back, top to bottom. A truly beautiful automobile that anyone would be proud to own. Street Dreams (830-997-1950) is a full service dealership that can assist with worldwide delivery, insurance, and financing options.