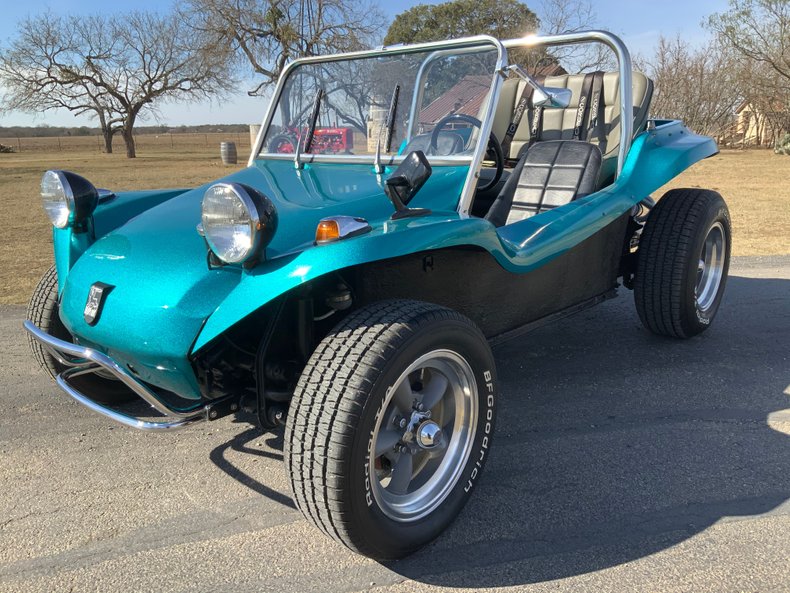 Welcome to StreetDreamsTexas as we celebrate our 21st year in the classic and muscle car business. In 1964 Bruce Meyers finished building the world's first street legal fiberglass dune buggy, 'Old Red', in his California garage. Little did he know that beach buggies, off road racing, and even the world would never be the same again. Within 3 years his creation would be on the covers of national magazines, shatter existing records in off-road racing, contribute to the formation of the National Off-Road Racing Association, and expand the auto enthusiasts definition of cool. Of course, Steve McQueen tearing around in a Meyers Manx in 'The Thomas Crown Affair' made the 'cool' factor seem inevitable. An example of the genius built into this design is the liberal use of compound curves to increase structural rigidity without unsightly braces. This charming little roadster is a genuine 1967 Meyers Manx and is one of only 5,280 produced. The first time we acquired this car I was tasked with finding out if it was real. As the phone was ringing at the Manx Registry, I noticed the e-mail address was mrsmanx. Yes, I was speaking with Winnie Meyers and yes, she confirmed that this was indeed Manx #0320! This running, jumping, exhilarating piece of history is powered by a 1970 'B6' 1600cc Volkswagen flat-four and sports front disc brakes, a fully independent suspension, and a 4-speed manual transmission. Although hundreds of thousands of copies were sold, only the 5,280 produced by Bruce Meyers are historically significant and appreciating. Sunscreen and Ray-Bans not included! Street Dreams (830-997-1950) is a full service dealership that can assist with worldwide delivery, insurance, and financing options.