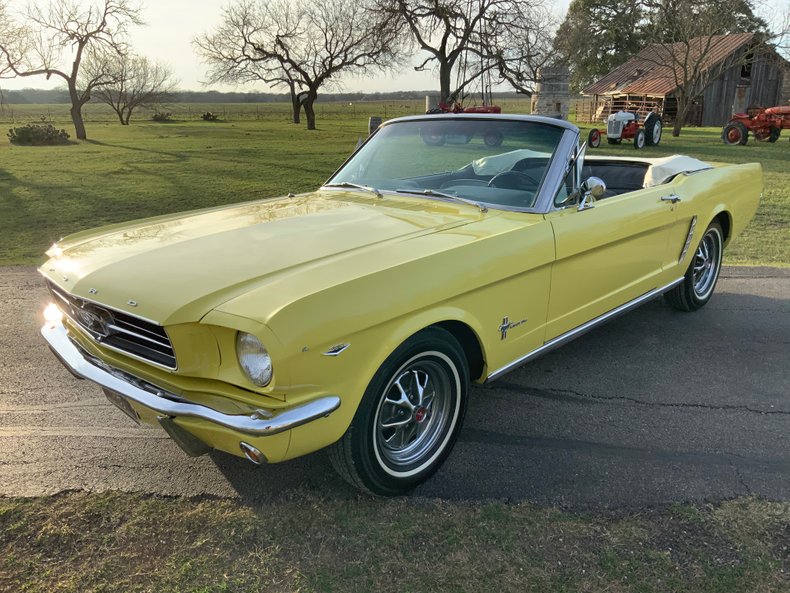 Welcome to StreetDreamsTexas as we celebrate our 21st year in the classic and muscle car business. Ford's classic 1965 Mustang has become such an iconic automobile that people tend to forget what an enormous impact it had when it burst onto the scene in April of 1964. At least 680,989 Mustangs were sold in its first model year, setting an all-time record for first-year new-model sales and becoming Detroit's greatest single success of the 1960's. With that volume of production it's hard to believe that dealers were auctioning them off because demand initially exceeded supply by 15 to 1! This 1965 Mustang Convertible clearly illustrates the classic long hood/short deck styling that swept the industry and spawned imitators that became known as 'ponycars'. Doesn't the Goldenrod Yellow paint (a 1955 Thunderbird factory color) seem to bellow 'Spring Is Coming!'? Our charismatic cruiser is sporting the correct 'C' code 289 V8, a C4 automatic transmission, power steering, front disc brakes, Styled steel wheels, and a new gas tank. While not restored to concours perfection as she has a few minor knicks in the paint, a patch in the floor pan and a couple of tears in the front seats this entertaining little gem is a charming sun-runner with plenty of character. Also, rumor has it that a yellow 1965 Mustang Convertible is capable of generating more smiles-per-gallon than anything in its class! Ray-Bans and Coppertone not included. The previous owner was a Shriner and had this baby for like 20 years using in the parades so he wanted a good dependable car that was not a show car. This is one of the lowest priced V8 convertibles we have had in more than 10 years. So driive it as is and enjoy or freshen to your liking. Street Dreams (830-997-1950) is a full service dealership that can assist with worldwide delivery, insurance, and financing options.