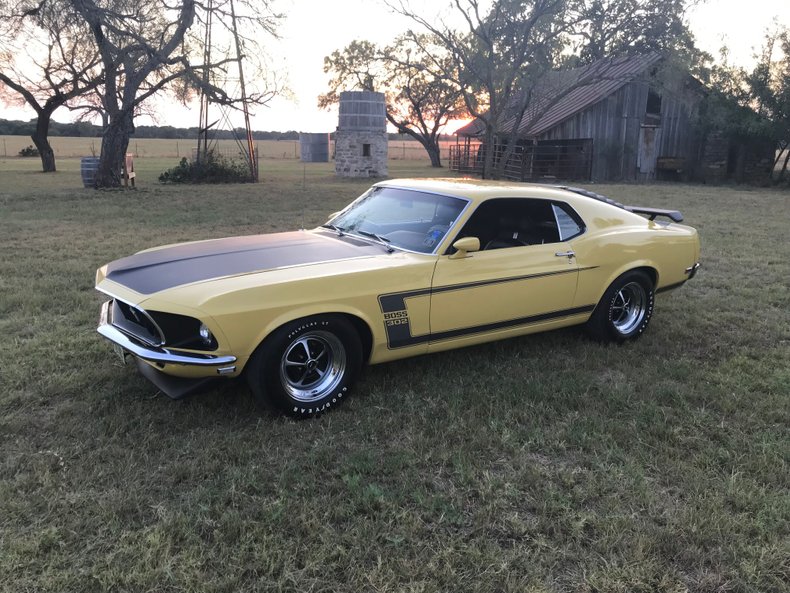 Welcome to StreetDreamsTexas as we celebrate our 20th year in the classic and muscle car business. Ford's Boss 302 Mustang earned its legendary status almost immediately upon its introduction in 1969, largely based on hard-fought battles waged on the racetracks and roadways of America. Built in order to homologate the special engine for Trans Am racing, the production Boss 302 was a barely tamed race car that sported huge ports and valves, a monstrous Holley 780 cfm carburetor, four bolt main bearings, and a stout solid-lifter camshaft. We are positively thrilled to offer this blue chip 1969 Boss 302 Mustang, particularly during this iconic automobile's 50th anniversary. Far less common than the 1970 model, a mere 1628 Boss 302's were made in 1969. According to the original invoice (!) this jewel was well equipped when it left the factory, sporting Bright Yellow (9) paint, Boss 302 V8, special handling suspension, Magnum 500 styled steel wheels, special cooling package, functional front spoiler, functional and adjustable rear spoiler, close-ratio 4-speed manual transmission (6), Traction-Lok differential, power steering, power front disc brakes, and an AM radio. This high-level restoration features the correct markings, hoses, clamps, decals, and overspray. The strong and correct engine (BCN C8FE-6015B, derivative F187xx1) is sporting the correct carburetor (C9ZF-9510-J), intake manifold (C9ZE9424-E), and exhaust manifolds. This MCA National Concours winner has its original invoice and build sheet and has been signed by Larry Shinoda, the father of the Boss 302. Come by and see one of the nicest 1969 Boss 302's on the market, but hurry, this one won't last long. Street Dreams (830-997-1950) is a full service dealership that can assist with worldwide delivery, insurance, and financing options.